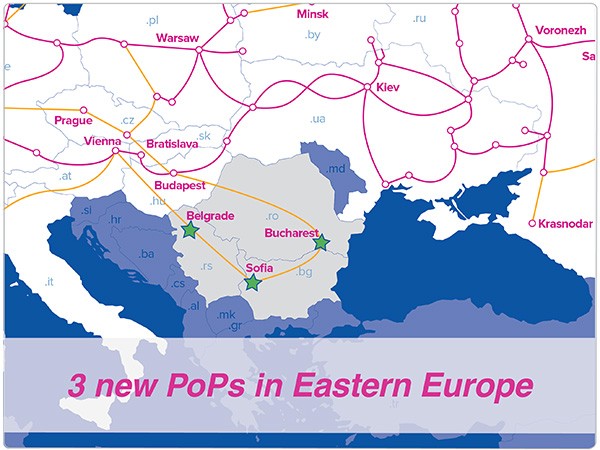 RETN expands its reach to the Balkan region

London, United Kingdom, 5th of April – RETN, the international network service provider, announced today the expansion of its pan-European network into the Balkans. The three recently announced PoPs in Bucharest, Belgrade and Sofia are interlinked and directly connected to the PoPs in Budapest and Vienna by 10G routes forming a ring. The new routes enable direct connection of the three largest countries on the Balkan peninsula with the rest of Europe where RETN operates.

According to Andy Bills, Executive Vice President Sales & Marketing at RETN, the network extension to the Balkan region is one of the company’s main investments in 2016: “RETN has already built up a significant presence in the eastern part of Europe, primarily due to its unique geographical coverage in Ukraine, Belarus and Russia. This year we are focusing on further expansion of RETN’s network in Eastern Europe”, said Andy Bills. “With regards to the Balkans, we believe that RETN will make a considerable contribution to the development of the wholesale market in the region, and we count on our sustainable growth there. The network development is intended to support the needs of customers in Southeast Europe who require  high quality and reliable connectivity with the whole of Europe, and vice versa. RETN will offer the same service portfolio and level of support in the Balkans as across the rest of its network – IP transit, connectivity services and remote peering to major IX’s. We will stick to the same standard of service provision, staying as flexible, fast and reliable as we are for our customers in other regions.”

If you wish to learn more about any recent developments or services across the RETN network, meet the RETN team at Capacity conferences in the coming months: Capacity Balkans, ITW and Capacity CEE 2016. To arrange a meeting, send us an email to market@retn.net.

RETN is an international network service provider offering a range of services across its own fibre-optic network to carriers, ISPs, large enterprises, CDNs, governmental organisations, Hosting and Cloud Providers. RETN has over 32,000 km of fibre on its pan-European network which connects 28 countries across Europe, Asia and North America, with a heavy presence in the high growth markets of Eastern Europe and Russia. The RETN backbone (which is connected directly to all major carrier-neutral DCs) carries a large proportion of international traffic in the regions it passes through. The DWDM based network is designed in a ring-architecture offering multiple layers of redundancy. The network’s unique geographical footprint provides over 5 Tbps of capacity over its four primary routes between the West and Asia.