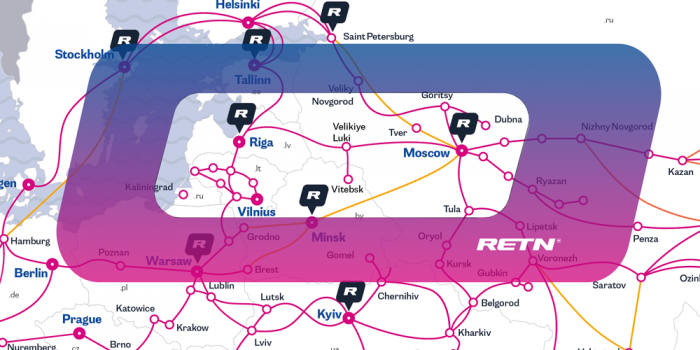 This recent infrastructure expansion provides diversity of current fiber routes across the RETN network and opens up new connectivity possibilities between East and West, with low latency (12 ms) transport services for enterprise and wholesale customers.

The completed DWDM route connecting Russia and Latvia runs on Infinera FlexILS equipment and thus is seamlessly integrated into the extensive cross-border optical network which is fully owned and operated by RETN. Connecting Eastern Europe and Russia to the West the 1195 km route is 100G enabled. It also provides additional redundancy to the Scandinavian and Baltic rings linking Baltic states to Northern and Western Europe on the RETN network.

Maxim Syunikov, Managing Director at RETN in Russia comments on the project: “We are constantly investing in the physical network infrastructure to extend our network core in Europe and Russia as we see the growing demand for diversity of fiber routes. This is especially relevant when it comes global enterprises and content providers. They are hungry for high speed scalable solutions, which we are delighted to bring to them, either in Russia or in many other territories covered by the RETN network.”

Leonid Shuralev, Commercial Director at RETN Baltic: “This year we significantly increased our operational activity in the Baltic and Scandinavian markets due to acquisition of OPTRON SIA and opening of the new RETN office in Stockholm. With the launch of the Moscow-Riga DWDM route we are delighted to start offering our customers more opportunities to connect to and from these regions”.

A fast-growing independent European network service provider connecting 36 countries on 3 continents through 250+ on-net PoPs. With extensive network coverage in Europe including CEE countries, as well as CIS countries and Russia, RETN is the only provider that operates its own end-to-end high-speed network stretching between North America and Asia and running through Western Europe onwards to the Chinese border. RETN offers a wide range of connectivity services, such as IP transit, Ethernet & VPN, Capacity, Remote peering to major IXPs, Colocation and Cloud Connect. Find out more on www.retn.net.