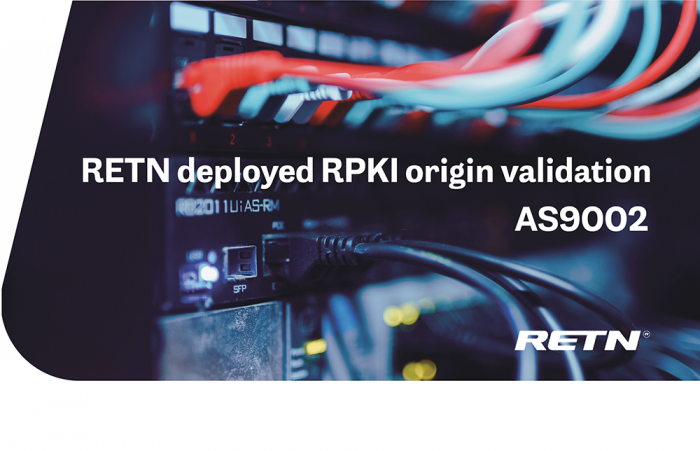 The internet routing system is dependent upon lots of relationships between thousands of networks that are based on mutual trust. Hence it is extremely vulnerable to both prefix hĳacking and route leaks, as in-fact any route can be announced by any random network on the Internet. In unprecedent times when we all depend so much on reliable Internet connections it has become crucial that ISPs around the world combine forces and adopt similar routing policies in order to protect the Internet ecosystem.

One of the other global initiatives supported by a growing number of providers, including RETN, is MANRS. It has arisen to reduce common routing threats and improve stability of the Internet.

Andrey Gazizov, Deputy CTO at RETN and Managing Director of RETN in UK comments on the announcement: “RPKI-based BGP route origin validation is not just one more set of filters we are using, it is our contribution to the global Internet community efforts to improve the security and stability of Internet routing. Having made this significant step ourselves, we also encourage partners and peers to deploy RPKI-based filtering and support the MANRS initiative for the sake of a healthy global Internet infrastructure.”

RETN is one of the fastest growing independent European providers of IP Transit and network services, with a unique capability to connect Europe and Asia. It is the only provider that operates its own end-to-end network (300+ on-net PoPs, 119000 km of lit fiber) through Western Europe, Belarus, Ukraine, Russia, Kazakhstan and onwards to the Chinese border, and is offering differentiated terrestrial connectivity between these major markets. RETN delivers various network services across its Eurasian network with industry leading delivery times, lower latency, leveraging deep technical expertise and providing better reliability than traditional terrestrial and subsea routes. RETN Capital Ltd. is ISO 27001:2013 certified. www.retn.net