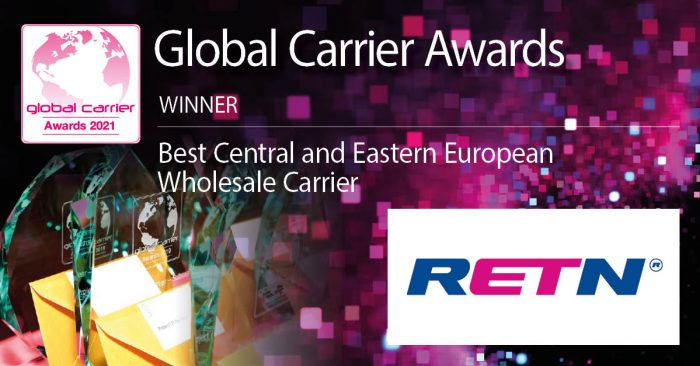 RETN, the international network service provider, was announced as the winner of “Best Central and Eastern European Wholesale Carrier” category by the Global Carrier Awards, the most prestigious awards programme in wholesale telecoms and connectivity.

Despite the global turmoil of the last 12 months RETN has strengthened its positions in the Central and Eastern Europe with massive development and investment in the region. “Our growth in Europe has continued unabated with new long haul fiber, new metro fiber, new Points of presence, new products and continued investment in staff and operations leading to sustained revenue and EBITDA. More importantly we’ve successfully continued to provide our customers with the RETN service quality and support they expect. It’s an honor and a privilege to lead RETN to new heights. We highly appreciate the recognition of the Global Carrier Awards” – said Tony O’Sullivan, CEO.

RETN is one of the fastest growing independent Eurasian providers of IP transit and enterprise communications services, with unique resources to connect Europe and Asia. Distinctive features of RETN network are its own international fiber network – circa 800 points of presence and a network length of 120 447 km, running on recognised equipment vendors such as Infinera, Juniper and Ciena.

RETN’s unique solution to connect Europe and Asia is built on its own homogenous DWDM and IP/MPLS Network Platform and widely branched land routes, passing through Western Europe, Eastern Europe, Russia and Kazakhstan to the border with China and further onwards into South East Asia.

RETN provides telecommunication services throughout its Eurasian network with short lead times, industry leading uptimes, and multiple layers of redundancy for its 1500 customers.