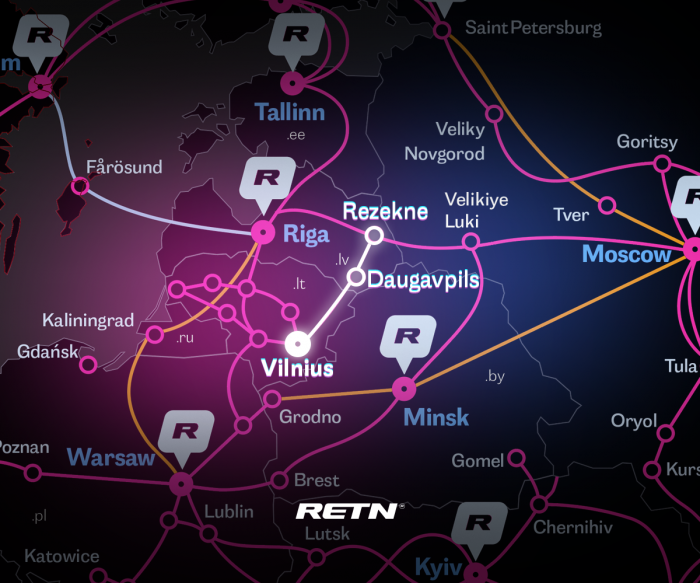 RETN is strengthening positions in Nordic and Baltic region

The international network service provider RETN enhances its presence and network in the Nordic & Baltic region. The RETN Group already has strategically placed offices in Latvia, Estonia and Sweden. Now RETN has opened a new office in Finland, which outlines the company’s long-term network presence in the country and commitment to the region. The RETN backbone network in Finland already aggregates six international DWDM routes and acts as a network transport hub, interconnecting Baltic and Nordic regions with Russia and Asia.

In conjunction with opening new offices in the region, RETN is strategically developing its network presence by opening the new DWDM route Rezekne – Daugavpils – Vilnius, one of the shortest existing routes to connect Vilnius and Moscow and the round-trip time of just 10,71 ms. It also improves network redundancy for the capital of Lithuania by adding a third diverse route coming to Vilnius. On a larger scale this route supplements the TRANSKZ project, connecting Europe and Asia as a redundant yet latency-equal circuit between Moscow and Warsaw.

Daugavpils – Vilnius part became RETN’s second cross-border route between Latvia and Lithuania, and it supports further IT and communications integration between EU countries.

RETN’s other recent investment in Nordic and Baltic region includes hires in sales, engineering and R&D in Sweden, Finland, and Latvia, aiming to strengthen the existing teams and provide both local and global expertise. RETN continues its expansion to guarantee the best customer service and highest SLA for fast, secure and reliable connectivity in Europe and Asia.

RETN is one of the fastest growing independent Eurasian providers of IP transit and enterprise communications services, with unique resources to connect Europe and Asia. Distinctive features of RETN network are its own international fiber network – circa 800 points of presence and a network length of 120 447 km, running on recognised equipment vendors such as Infinera, Juniper and Ciena.

RETN’s unique solution to connect Europe and Asia is built on its own homogenous DWDM platform and widely branched land routes, passing through Western Europe and through Ukraine, Russia and Kazakhstan to the border with China and further onwards into South East Asia.

RETN provides telecommunication services throughout its Eurasian network with short lead times, industry leading uptimes, and multiple layers of redundancy for its 1500 customers.