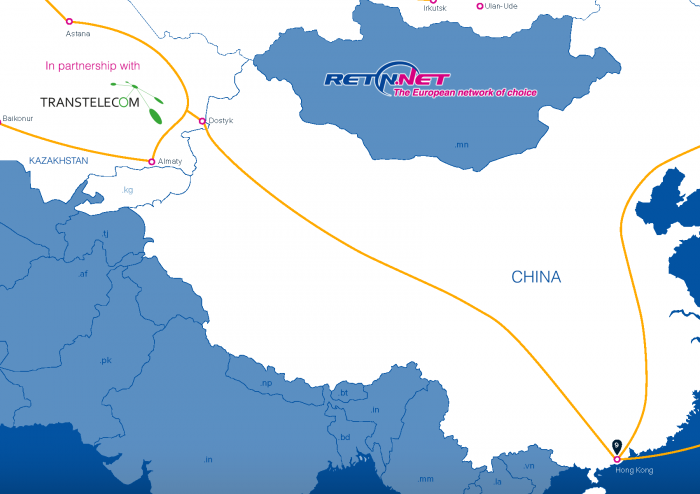 London, 6 December 2016 – RETN and Transtelecom (Kazakhstan) announced the launch of a new terrestrial network– TRANSKZ – to connect the RETN pan-European network with Hong Kong. Thanks to a partnership between JSC Transtelecom and RETN this new Network is one of the shortest to connect Hong Kong to the Russian border via two routes passing through Kazakhstan – via Almaty and Astana to Dostyk. Depending on route the RTT can vary from 166 to 180 ms.

RETN’s drive to extend its reach and ramp up operational activity has resulted in constant network growth with special focus on cross border routes in both Europe and Asia. In less than 10 years RETN has established itself as a major player on an international level and raised the attention of well-known carriers, operators and companies all over the globe. The TRANSKZ Network is one of the most important and valuable projects completed by RETN.

“The TRANSKZ Network is definitely a success”, stated Dmitry Samarin, Chief Executive Officer at RETN. “As a result of the geographical development of our network we can now offer our partners and customers improved connectivity and resilience to the Far East. Thanks to the partnership with JSC “Transtelecom” RETN has surpassed the existing routes on the market.”

The TRANSKZ Network allows for transport of traffic from sub-1Gbps to N x 10 Gbps between Europe and East Asia linking three of the world’s biggest financial centres in London, Frankfurt and Hong Kong. RETN’s local offices in these regions guarantee their customers first-rate commercial and technical support on both sides of the world.

RETN is an international network service provider offering a range of services across its own fibre-optic network to carriers, ISPs, large enterprises, CDNs, governmental organisations, Hosting and Cloud Providers. RETN has over 32,000 km of fibre on its pan-European network which connects 28 countries across Europe, Asia and North America, with a heavy presence in the high growth markets of Eastern Europe and Russia. The RETN backbone (which is connected directly to all major carrier-neutral DCs) carries a large proportion of international traffic in the regions it passes through. The DWDM based network is designed in a ring-architecture offering multiple layers of redundancy. The network’s unique geographical footprint provides over 5 Tbps of capacity over its four primary routes between the West and Asia.