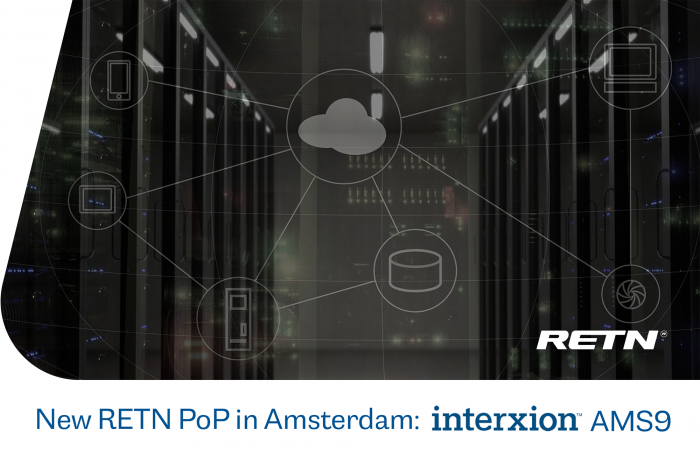 The new RETN PoP is the latest in the series of launches over the past decade. At the moment RETN has established its presence at various Interxion data centers across 13 European cities, thus covering the whole geography of Interxion’s facilities. Adding the new PoP to their vast connectivity list, RETN continues to provide ease of access to their extensive Eurasian network for Interxion customers, increasing collocation options for carries and enterprises wishing to connect to Interxion across their network throughout the world.

Luc Janssen, Commercial Director at RETN B.V., comments on the development: “Amsterdam is one of the busiest data center markets, which attracts enterprises in Asia and Europe that are seeking secure and reliable connections to colocation and cloud services in Europe. Together with Interxion we are delighted to offer them a solution in all key regions in Europe. Extending our network footprint in Amsterdam metro area with the new PoP, we hope to provide additional value to our existing customers and prospects. We are sure that our continued cooperation with such a well-established and innovative data center company as Interxion will help them to easily reach out to new markets and change the way they interconnect within Europe and beyond using our global network capacities and Interxion’s facilities”.

With the opening of the new facility Interxion doubled its connectivity capacity in Amsterdam and increased possibilities for their customers to connect to international providers such as RETN in the region.

Dirk van de Geer, Managing Director at Interxion Science Park: “We are extremely pleased to welcome RETN at our AMS9 facility in Amsterdam Science Park. RETN greatly compliments our unique position in The Netherlands to provide cost effective and reliable connectivity solutions to from Europe to East Asia via Central Asia and Russia. The presence of RETN will undoubtedly improve the hub’s attractiveness for partners, customers and operators to meet, peer, exchange traffic, and grow business together.”

A fast-growing independent European network service provider connecting 37 countries on 3 continents through 250+ on-net PoPs. With extensive network coverage in Europe including CEE countries, as well as CIS countries and Russia, RETN is the only provider that operates its own end-to-end high-speed network stretching between North America and Asia and running through Western Europe onwards to the Chinese border. RETN offers a wide range of connectivity services, such as IP transit, Ethernet & VPN, Capacity, Remote peering to major IXPs, Colocation and Cloud Connect. Find out more on www.retn.net.